Winner of the Champion Wine Award for Wines of Canterbury 2016

Wines of Canterbury are delighted to announce the winner of the Champion Trophy for the 2016 Canterbury Wine Awards as the Waipara River Estate Late Harvest Noble Riesling 2013.

The award was collected by estate owner Michael Peters at the David Jackson Dinner on 18 May. Peter’s said he was “absolutely delighted to take away the champion trophy, in par cular as the wine came from the oldest vineyard in the Waipara Valley – a bou que family opera on”. Waipara River Estate is a 4Ha family owned vineyard by Michael and his partner Tina Beasley. They produce Rieslings, Pinot Noir, Gewürztraminer, Cabernet/Merlot and Cabernet Sauvignon. The estate is home to the oldest vines in the Waipara region having been planted in early 1981. The estate’s wines are available through their website www.waiparariver.com or by calling Linda de Vine on 021 483 112. 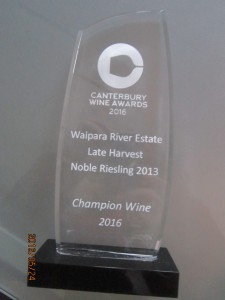 The chair of the judging panel, Jo Burzynska (Wine Educator and Wine Editor of Viva) said “This was one of the strongest years so far at the compe on, with a really impressive line-up of entries in most categories and a number of names new to the show winning top awards. The Riesling class was again one of the highlights, and perhaps not surprisingly yielded the Champion wine of the show; the highly impressive first- me entry, Waipara River Estate Late Harvest Noble Riesling 2013.” Jo was joined on the judging panel by Kirsten Creasy, Winemaker and Oenologist with Hill Laboratories, and local chef and Restaurateur, Jonny Schwass (Mrs Hucks, Harlequin Public House).

Wines of Canterbury coordinates the Canterbury Wine Awards which is now in their fi h year. The awards are open to all wines grown in the Canterbury region – Waitaki River in the south to the Conway River in the north. Since the awards began 253 wines have been awarded medals. This year’s results saw 9 Golds, 19 Silver and 34 Bronze medals.

Dive straight into the feedback!Login below and you can start commenting using your own user instantly